Out on a Sunday walk, going my usual route, I noticed this long chalk arrow pointing Left to the road into the woods. It is one of the 2 roads near the “Why Not” sign (see last week’s post). So, this week I took the road into the cool woods as the arrow suggested, I was curious.

I carried on wondering if there would be another arrow pointing left at the end of this road. … Maybe it was directing some folks to a party or something? 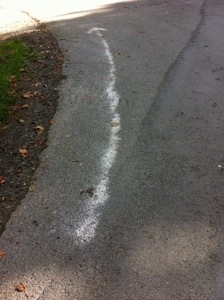 There Was another arrow!  So I took that route, following Arrow #2.

This was a short jaunt up the hill then one could go either right or left.

Would there be another arrow?

Yes! there would be and it was another left turn.. Where is this thing taking me? It’s Got to be some gathering, maybe a birthday party? So this road I am about to debark on is a long one and if I took it, I would be making a big long loop home, so off I go looking for one more arrow that would be pointing into someone’s driveway. But there was nothing … and when I came to the end of This road, sure enough … Another Left turn arrow! 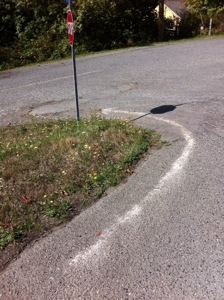 So now my curiosity is on fire. Surely there will be something these arrows are guiding me to! I take the sharp Left turn, which is still on the route circling towards home. Again on the look out for and end to this treasure hunt, what the treasure would be I had no idea, but I thought Surely there had to be one. At the end of this road would be an answer. A right turn Arrow would continue the game, but another Left hand arrow would mean something entirely different. Follow me here.

Which means …. that this series of arrows just takes one around one big long circle. 5 Left turns that repeats on and on and on. There is no party, no gathering, no … Nothing! Just a journey in itself. It made me laugh to myself, it was absurd and it surprised and delighted me. In a way, I found that I was actually relieved that it had no purpose other than itself.
I had been Looped!