When I’m traveling on the ferry, no matter what I am doing, sketching, reading, knitting, I frequently look up and out at the magnificence of the journey. When I looked up this time … This is what I saw!

It’s not everyday you see something like this; A guy balancing on the ferry railing.

I first noticed this guy as we were about to drive onto the ferry. You see, the announcement had been made for “All drivers going to the Gulf Islands to return to their cars in preparation for loading”. He had arrived late and I guess he hadn’t heard the announcement so as I looked on wondering what they doing leaving their car now (and I’m sure I wasn’t the only one wondering) he and his 2 buddies playfully and casually walked towards the ferry market place seemingly oblivious of the situation.
Then I forgot about them as I settled into my seat on board. Until I looked up and saw more of his shenanigans [Defination: silly or high-spirited behavior; mischief.]

After a first fail he tried it again.
But to tell you the truth … ?And I am Only telling this to You….
His friend saw me photographing him thru the window called the balance’rs attention to me. Once he saw me, I circled my forearm to encourage him to try again.
It was all in fun, he had an audience now! … and there were others
So he tried again and went up …. 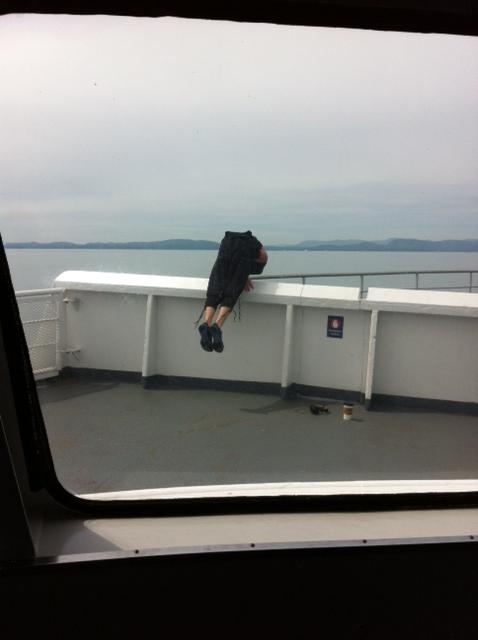 And up … It looked hard

Oh my! He’s going to do it! A hand stand on the Ferry Railing!! 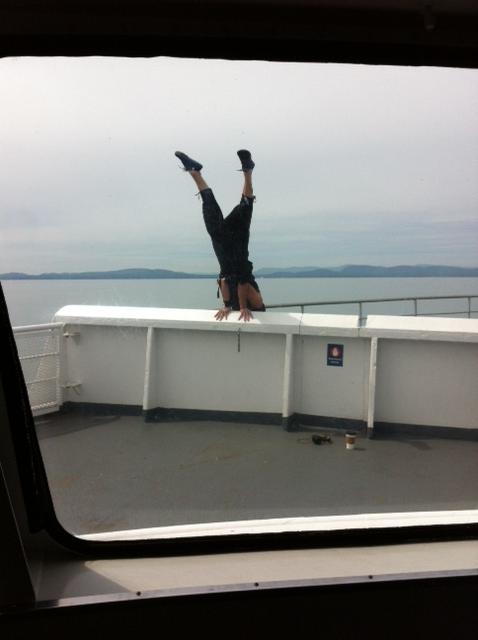 See that little sign to the right? It says “Restricted Area”. He is So not allowed to be doing what he is doing!

This is where it’s not fun anymore. He is Faltering. He is Falling. He is way too close to the Edge. My hand is over my mouth in horror!

There is no next picture because he DOES go over the edge! Really! He just DISAPPEARED!
….. But only onto the bow of the boat. But it IS just a small space. He really could have gone flying over into the sea!
So Easily
Everyone who was watching breathed a collective sigh of relief and we laughed our tension away when he reappeared behind the railing. At least I did. I was pretty scared there for a second.
But it was pretty entertaining and he was fine and pretty happy with his Risky Behavior